Due to the consumers shifting from bands to smartwatches, global wearable band shipments down by  4% to 41.7 million units in Q1 2022, as per the latest study by market researcher Canalys.

The other market findings and analysis reported by Canalys includes:

Wristwatches, consisting of basic watches and smartwatches, accounted for 76.6% of all wearable band shipments in the quarter, growth of 15% to 32.0 million units.
Basic bands suffered a 37% decline, a sixth consecutive fall since Q4 2020. Basic band shipments dipped below 10 million for the first time after peaking at 27.9 million in Q4 2019.
The increase in watch shipments helped offset the basic band drop but still resulted in a decline in the overall wearable band market. 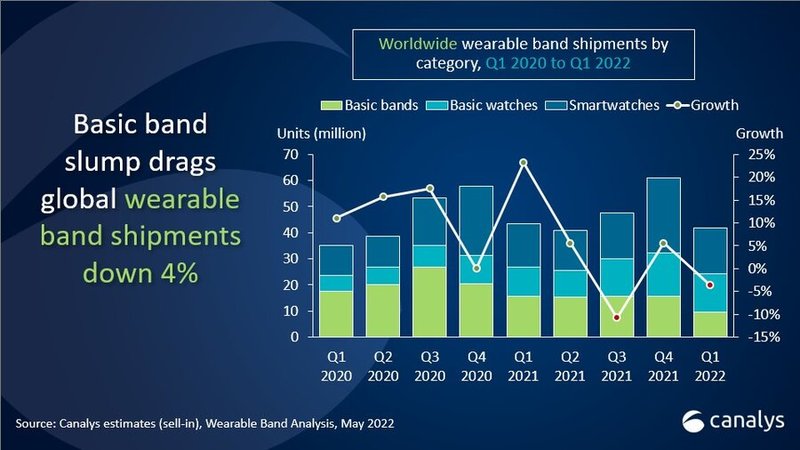 The rise of basic watches accelerated the shift from bands to watches. Basic watches run rudimentary real-time operating systems but lack support for third-party apps, as opposed to smartwatches, which run fully-fledged operating systems with third-party app support. “Consumers are favoring watches over bands. With bigger displays, richer features and longer battery life, they believe watches are better able to fulfill their health-tracking and digital lifestyle needs,” said Sherry Jin, Canalys Research Analyst. “Basic watches are positioned as an affordable step-up from basic bands, suitable for price-conscious consumers with growing expectations as to what wearables can do.”

According to the latest Canalys consumer survey, conducted in April 2022, out of 4,000 respondents from four Western European markets, 34% said they intended to buy a smartwatch in the next 12 months, against 17% who would choose a fitness band. Smartwatches stood out as the most popular companion device to smartphones for Western European consumers. The survey results corroborate Canalys’ expectations that future consumer demand will shift away from basic bands to watches, potentially affecting vendors such as Xiaomi and Fitbit, which are still shipping basic bands in significant numbers. 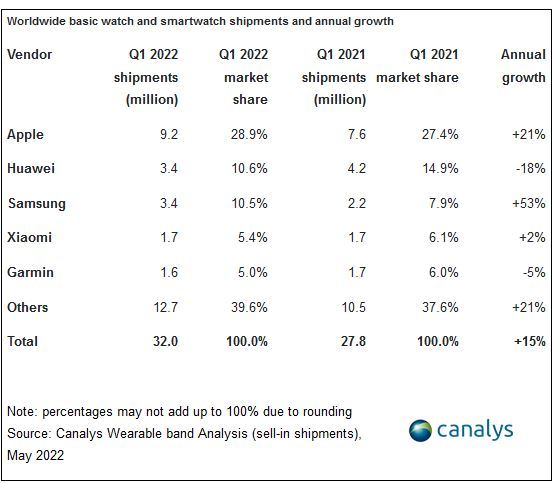 Note: percentages may not add up to 100% due to rounding
Source: Canalys Wearable band Analysis (sell-in shipments), May 2022

Apple maintained its lead in the wristwatch segment, driven by strong demand for the Watch Series 7. “Despite growing 53%, Samsung was beaten by Huawei for second place. Even with an improved device portfolio mix of basic and smartwatches, Huawei is on a declining trend as its smartphone business has been cut,” said Canalys Analyst Cynthia Chen. “Xiaomi bounced back to fourth place on the back of increasing global availability of its Mi and Redmi basic watches, overtaking Garmin, which came fifth.”

Despite the challenging market conditions, demand for advanced smartwatches is strong, shown by solid performances by Apple, Samsung and Garmin. “Rising global inflation is expected to hamper consumer spending on non-essentials. But smartwatches are now tools that many users have grown dependent on to keep them healthy and informed, and it will remain a category with growth potential in 2022,” added Chen. 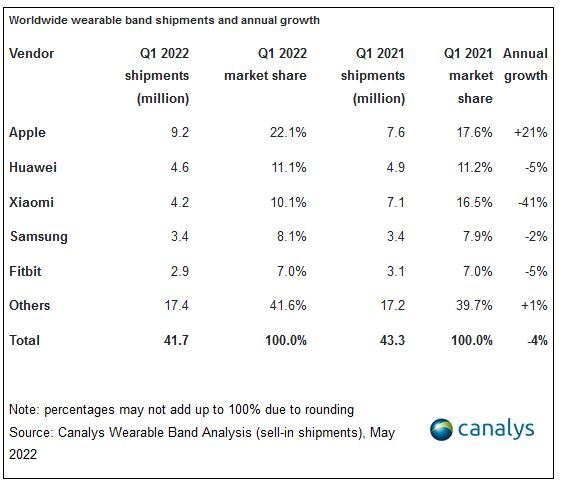 Consumer
IHS: 8% growth in global shipment of STBs in 2013