While the semiconductor industry heading towards the extremely challenging 5 nm nodes and down further, silicon becomes a tougher material to handle, that giving way to use III-V compound/wideband gap semiconductors and any new material such as graphene. Even, why not metals!

Researchers at University of Hamburg could exploit the properties of metals, where metals in their nano particle form shows semiconductor like properties.  Dr. Christian Klinke and team produced transistors by depositing metal nano particles as thin films of size one layer of nano particles, kind of atomic thick.  The metal nano particles refused to show their metallic character under current flow but show energy gap due to Coulomb repulsion of the electrons among one another. The researchers could shift the gap energetically by using a controlling voltage, so that current can be switched on and off, just like a MOSFET.  Though this is not a totally new approach, but the difference is instead of depositing individual nano particle structures, these researchers deposited nano particles as thin films, which is said to be a simpler process and reliable. The transistors made out of this process are called "Coulomb transistors". 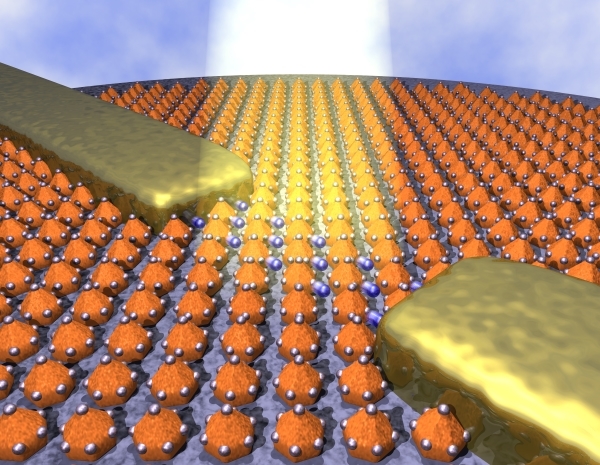 All this invention does not matter, as long as it doesn't make sense commercially viable, but the researchers present the three important advantages of this Coulomb transistors. They are:

1. The synthesis of metal nanoparticles by colloidal chemistry is very well controllable and scalable.
2. It provides very small nanocrystals that can be stored in solvents and are easy to process.
3. The Langmuir-Blodgett deposition method provides high-quality monolayered films and can also be implemented on an industrial scale.

The above advantages resulting into use of present semiconductor lithography equipment/processes/methods  to fabricate these coulomb transistors at deeper nm  nodes.

The details of this scientific research results are published in the scientific journal "science advances".

However researchers cautiously alert there is still lot of research to be done in this area. another area of application this technology is they can also be used as chemical sensors.

To learn more on this, visit the researcher's page at  https://www.chemie.uni-hamburg.de/pc/klinke/

Embeddedcomputer
A tiny thumbnail size embedded board from Adafruit for ma...

India-hardware-market
CoEs in karnataka for learning skills in Industry 4.0, so...

Student
IPC launches an online course to learn its standards

India-hardware-market
You can buy electronic components in India from Mouser by...

Power-supply
DC-DC handbook provides details on use of high performanc...

Student
The best robotics competition in India open for registration

Student
M.Tech in semiconductor engineering jointly by KLU and T...

Student
Winners of TI Innovation challenge and ADI's Anveshana in...

Student
VLSI design training: not "all is well"

Student
A book on Carrier Ethernet by Fujitsu

Software
Tutorials on latest in EDA and IP standards by Accellera

Student
STM32 developers can now get the benefit of ARM mbed

Solar
Patents filed in Solar and wind rises sharply in 2012 and...