US Patent titled “Sensory Lighting System and Method for Characterizing an Illumination Space” was awarded to LESA' faculty and graduate students from Rensselaer Polytechnic Institute and Boston University. The patent explains the process of LED lighting system in a space that can detect occupants’ presence, location and position without the use of cameras so that guarding the privacy of the room’s occupants. 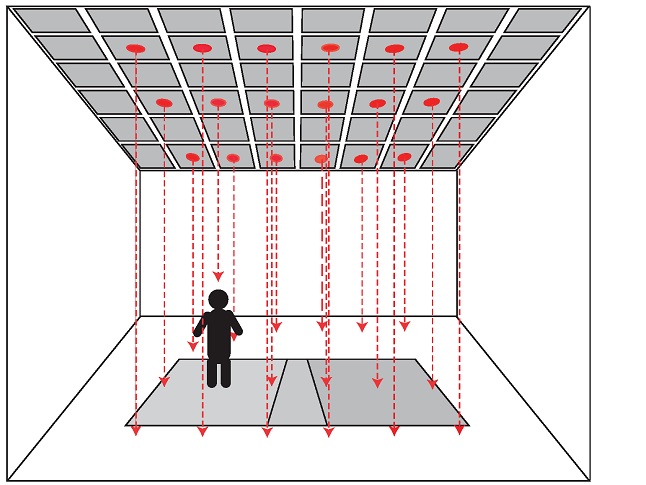 Robert Karlicek, LESA Director says, “Every illuminated space has an optical “fingerprint”. “If nothing is moving within the space, then the distributions of light and color in the space don’t move. Using a limited number of low cost sensors mounted on the ceiling, we can measure the optical fingerprint of any space and determine when and how things move within it”.

Time-of-flight (ToF) sensing technology is being used to preserve privacy- occupancy sensing by the patented technology. ToF sensors utilize light to measure reasonably accurate physical distance. It allows one to map the space, and determine the location as well as height (sitting, standing, prone) of individuals and other objects in the room.

Karlicek says “Imagine a building management system in an environment such as a healthcare facility, office or retail space, warehouse, airport, or library that always knows where occupants are located as well as the kind of activity occurring, using information generated by the lighting system”. “This kind of data is needed to maximize building energy efficiency, improve security operations, and automatically create more comfortable environments for occupants. The patented technology developed at LESA promises to be more cost effective and accurate than many competing technologies”.

Cameras are not being used and an individual’s identity cannot be known that makes way to use the technology featuring privacy preserving in any location. Thus, making it very attractive. The other most crucial thing is that most buildings have already installed lighting arrangements, the technology can piggy-back on existing infrastructure once an LED lighting system is in place.

A Computer vision expert, Richard Radke at Rensselaer Polytechnic Institute who says, “Time-of-flight sensing is very appealing for occupancy sensing in smart environments and Internet-of-things applications, since it’s fairly robust to the ambient light in the room and the clothing of the participants. The sensors are also becoming very inexpensive. We’re excited about integrating time-of-flight into more advanced cognitive environments that can understand and react to the activities of their occupants”.

The test beds are dedicated to taking LED lighting to new levels of cost-effective data generation and control using only the properties of the light itself.

LESA’s intention is to integrate the time-of-flight sensors along with other low-cost sensing technology where the control system is built with software and machine learning capability.