Aerospace and defense electronics market for India is estimated to be $72 Billion by 2029. Defense electronics opportunity is really a big fruit hanging high up in the tree. Can start-ups afford to focus on high hanging fruits. The only ladder to reap that fruit is having a very innovative technology which is not only cutting-edge/bleeding edge but also reliable, rugged and robust. The technology can be a small software or hardware component or a subsystem. Also what is really required for growth is the ability to scale to large volumes and the ability to serve global markets.

India could achieve some level of indigenisation in defense technologies not only due to the denial of technology and also due to the effort of building small and medium scale defense industry by handholding them in the process of building products for PSU and Government owned defense organisations. So for start-ups to scale higher, there is some handholding required by experts in the government and also from industry bodies such as ELCIA, IESA, and NASSCOM.

To take further, IESA with the help of its members and other organizations can build a deftreneur park, in similar lines how IESA and STPI have built electropreneur park in Delhi. IESA and such bodies can help Indian industry and academy by building semiconductor and electronics industry focused material research, testing and processing labs.

Dr. V. K. Saraswat said at the event “India’s electronics market has been witnessing huge market in Consumer Electronics, Industrial, Communication, Strategic Electronics. Today, the size of Strategic Electronics is projected to grow to $72 Billion from the present $1.7 Billion market, and this indicates immense potential as there exists a significant gap between supply and demand. Though India is considered as a ‘Soft Power’ in the space, we are yet to witness a single Indian company that develops strong end-to-end Aerospace and Defense software solutions. As a result, we keep depending on foreign companies. The only on boarding option for Indian electronics component companies in India is to target Strategic Electronics (Defense) industry, and we should act now. We need to understand that the return on investments in the Defense Electronics industry in India is long term and the players need to have a long-term view.”

“We expect the government to support startups in the Defense Electronics industry in India. The Defense manufacturing shifts globally has seen the Wave 1 from US to Japan; Wave 2 from Japan to Europe, Wave 3 from South East Asia to China; I want Wave 4 to be from China to India,” he added.

K. Krishna Moorthy, Chairman-IESA said “We need to have polices and processes enabling a strong start up eco system which innovates and also absorbs technology which come as part of technology transfers and then develops the next generation technology here, as well as create the infrastructure for defense manufacturing powerhouse.”

R. Chandrashekhar, President, NASSCOM said “They (Government) should create an environment for the domestic players to cross-pollinate knowledge and technologies with other countries.”

M.N. Vidyashankar, President, IESA, said, “Our focus should revolve around building the startup ecosystem with the required thrust”

Below are some of the pictures from the event: 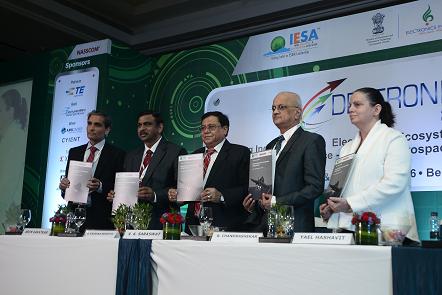 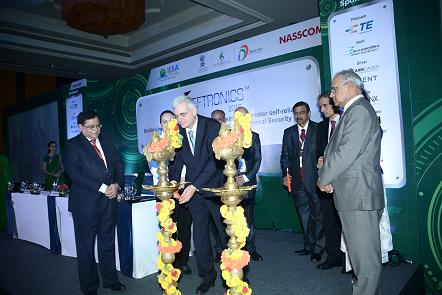 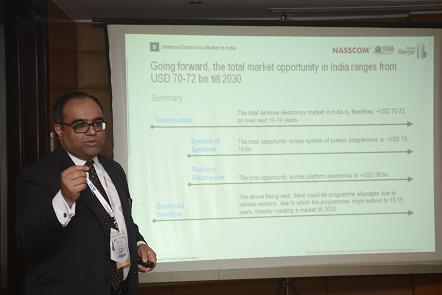 Aerospace-defense
Panasonic to test its electronics engineering materials i...

Aerospace-defense
A self driving space vehicle transporting cargo to ISS

Aerospace-defense
IPC estimates: Mil/aero accounts for about 27% of PCB mar...