Taiwan holds on its top position in semiconductor foundry business

Globalfoundries, the second ranked semiconductor chip contract manufacturer had increased its marketshare a little, so that it could move to second position from third position.

Fourth biggest foundry in the world is Samsung Electronics whose share is also increased by less than 1%.

Japan-based Fujitsu semiconductor, though ranked eighth grown fast by nearly 30% in the year 2015 compared to 2014.

The second fast-growing foundry in the list is Israel's TowerJazz, ranked seventh by Gartner with the growth rate of 16% in year 2015 compared to 2014.

The top 10 foundries constitute nearly 90% of the market.

"In 2015, semiconductor device market revenue declined due to excess IC inventory, poor demand for mobile products and PCs, and slowing tablet sales," said Samuel Wang, research vice president at Gartner. "The slowdown in the device market has driven semiconductor producers to be conservative in placing wafer orders to foundries. Foundry growth was only possible from the high wafer demand by Apple and the revenue conversion of a few integrated device manufacturers (IDMs) to foundries."

"On a quarterly basis, foundry revenue changed quarter to quarter in 2015. The normal seasonal pattern of a very strong second quarter was not obvious, while most foundries continued to revise their business outlook during each quarter's earnings release," said Mr. Wang. "The peak inventory level for the semiconductor industry continued to push out during 2015, from the second quarter to the third quarter, and through the rest of the year."

Below is the ranking table by Gartner 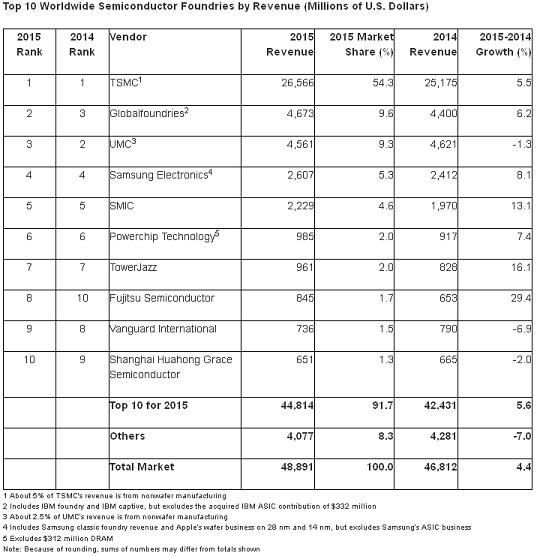