"Bucking the post-holiday decline normally associated with the first quarter is a strong sign for the wearables market," said Ramon Llamas, research manager, Wearables. "It demonstrates growing end-user interest and the vendors' ability to deliver a diversity of devices and experiences. In addition, demand from emerging markets is on the rise and vendors are eager to meet these new opportunities."

"What remains to be seen is how Apple's arrival will change the landscape," added Llamas. "The Apple Watch will likely become the device that other wearables will be measured against, fairly or not. This will force the competition to up their game in order to stay on the leading edge of the market."

"As with any young market, price erosion has been quite drastic," said Jitesh Ubrani, senior research analyst, Worldwide Mobile Device Trackers. "We now see over 40% of the devices priced under $100, and that's one reason why the top 5 vendors have been able to grow their dominance from two thirds of the market in the first quarter of last year to three quarters this quarter. Despite this price erosion, Apple's entrance with a product priced at the high end of the spectrum will test consumers' willingness to pay a premium for a brand or product that is the center of attention."

Fitbit started 2015 the same way it ended 2014: as the clear market leader in the worldwide wearable device market. Fitbit's first quarter shipments were driven by the release of three new devices (the Charge, Charge HR, and the Surge) along with continued demand for its older Flex wristband and One and Zip clip-on models. Separately, these address multiple segments of the market, from casual exerciser to committed athlete, and collectively leverage Fitbit's behavior change engine to encourage activity.

Xiaomi started off the year by blasting through the one million unit mark with its Mi Band for the first time, a significant feat made all the more impressive considering the device just started shipping during the second half of 2014. Similar to its smartphones, Xiaomi's Mi Band was delivered primarily within its home country of China, but recent announcements point to more global aspirations for the company.

Samsung's fourth place finish came from worldwide demand for its Gear smartwatches. Since its debut in 2013, the Gear portfolio has diversified to include the Tizen-powered Gear, Gear 2, Gear Fit, Gear 2 Neo, Gear S, and the Android-Wear powered Gear Live. What has limited Samsung, however, is the ability for Gear devices to connect only with select high-end Samsung smartphones.

Jawbone beat Pebble and Sony for fifth place, a result driven by the release of its UP MOVE and continued demand for its nearly year-old UP24. The company will release two new devices in the second quarter of 2015, with the similarly-functioning UP2 and the mobile payments-enabled UP3. The company maintained its design strategy of no displays, but again touted its predictive data engine to encourage healthier lifestyles. 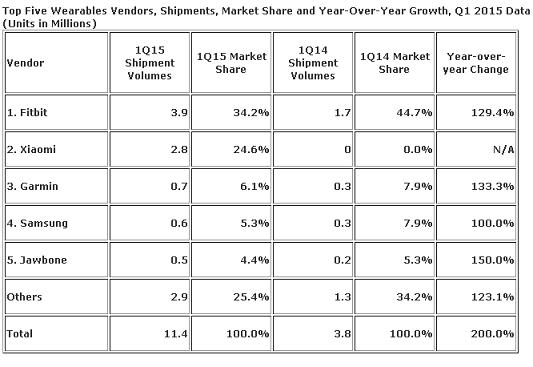