1 Trillion devices by 2016: semiconductor everywhere and anywhere is the trend

Below is the market analysis points shared by IC insights related to the growth of shipment in units of semiconductor devices:

Total semiconductor unit shipments (integrated circuits and opto-sensor-discrete, or O-S-D, devices) are forecast to grow annually through the current cyclical upturn and top one trillion units for the first time in 2016 according to forecast data presented in the new 2014 edition of The McClean Report—A Complete Analysis and Forecast of the Integrated Circuit Industry. Semiconductor shipments in excess of one trillion units are forecast to be the “new normal” beginning in 2016.

As seen in Figure 1, semiconductor unit shipments are forecast to increase to 1,005.8 billion devices in 2016 from 32.6 billion in 1978, which amounts to average annual growth of 9.4% over the 38 year period and demonstrates how increasingly dependent the world is on semiconductors. From 2008 to 2013, the average annual growth rate of semiconductor units cooled to only 5% due to global economic doldrums, but stronger 8% annual growth is forecast from 2013 to 2018 as global economies regain momentum and a healthier market prevails for electronic systems. 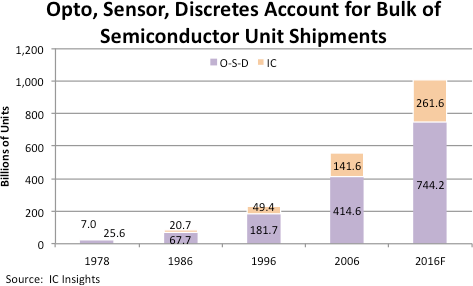