Forecast: Medical semiconductor market to grow by 12% in year 2014

Further findings and market analysis highlights shared by IC Insights on medical electronics and semiconductors include:

Between 2012 and 2017, worldwide sales of medical electronics are projected to rise by a compound annual growth rate (CAGR) of 7.3%, reaching $65.4 billion in the final forecast year of the 2014 IC Market Drivers report. The brand new medical electronics section in the 475-page report shows semiconductor sales for healthcare systems applications rising by a CAGR of 10.5% and reaching $6.8 billion in 2017 (Figure 1).

In the years ahead, stronger growth in medical electronics will be fueled by sales of less expensive diagnostic and imaging equipment in China and other developing country markets as well as the explosion of wireless mobile healthcare systems that monitor patients remotely and reduce the need for expensive stays in hospitals. The 2014 IC Market Drivers report forecasts wireless mobile medical systems and closely associated wearable fitness-tracking devices generating revenues of nearly $1.9 billion in 2014, which is a 53% increase from about $1.2 billion in 2013, when worldwide sales grew 27%.

Development trends in medical systems for hospitals, clinics, and doctor offices are heading in two different directions as equipment makers respond to growing pressures for lower costs and increased availability of healthcare in poor and developing countries. One trend is to make new medical diagnostic systems smaller and less expensive so that equipment can be used in the rooms of hospital patients, more clinics, and doctor offices versus the dedicated examination rooms in hospitals and imaging centers. Advancements in semiconductor sensors—many of them built with microelectromechanical systems (MEMS) technology—wireless ICs, and system-on-chip (SoC) designs are also enabling new types of mobile medical devices that monitor patients and the elderly at home and then relay information to doctors or hospitals via wireless connections to cellphones or the Internet. 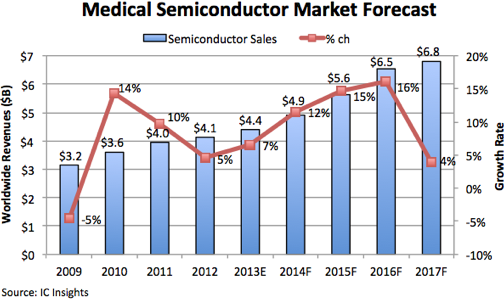 The other trend highlighted in the new IC Market Drivers report is the creation of more powerful and integrated systems, which are expensive but promise to lower healthcare costs by detecting cancer and diseases sooner while supporting less invasive surgery for quick recovery times and shorter stays in hospitals. Computer-assisted surgery systems, surgical robots, and operating-room automation are among new technologies being pursued by some hospitals in developed-country markets.

Developed countries (such as the U.S., Europe, and Japan) have about 18% of the world’s population, but account for nearly 80% of total healthcare spending—approximately $5.3 billion versus $1.4 billion in 178 developing and poor countries during 2012. The world’s aging population in both developed and developing countries stands to greatly benefit from new wireless health-monitoring systems and telemedicine services that are aimed at reducing cost and serving more patients. While the large establish markets have struggled in recent years, medical equipment sales have been booming in China, which is pursuing an ambitious initiative to significantly upgrade primary healthcare, hospitals, medical infrastructure, and access to medical services in the country’s vast rural regions. China’s investments in medical and healthcare infrastructure are expected to total $63.5 billion this decade. Consequently, China’s share of worldwide medical systems sales is expected to more than double in the next four years, reaching 10% in 2017 versus 4% in 2013, while the market shares of developed countries shrink, according to IC Insights’ new report.

Medical
Over the counter hearing devices for people with moderate...

Medical
A speech to text powered software for hearing impaired

Medical
Bluetooth Smart is most used wireless in mobile health an...

Medical
How Raman spectroscopy is revolutionizing the field of he...

Rf-microwave
Mobile health is biggest market for M2M, as per Strategy ...

Medical
Coating for medical implants for preventing them from hum...