IHS has forecasted the penetration of gallium nitride-on-silicon (GaN-on-Si) wafers into the light-emitting diode (LED) market to increase at a compound annual growth rate (CAGR) of 69 percent from 2013 to 2020, by which time they will account for 40 percent of all GaN LEDs manufactured.

The figure below shows the GaN-on-Si LED market share outlook in terms of revenue for the packaged LED market. 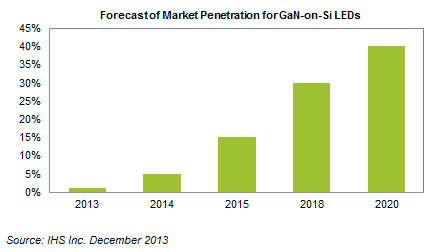 “Manufacturing large ingots made from sapphire is difficult, whereas silicon wafers are available from 8 inches up to 12 inches and are generally cheaper and more abundant,” said Dkins Cho, senior analyst for lighting and LEDs at IHS. “There is a large pre-existing industry for silicon-based manufacturing that is leveraged to create economies of scale and reduce the cost of an LED.”

IHS says Companies that previously manufactured CMOS semiconductors already own legacy 8-inch CMOS fabrication units that can be converted for LED production with a small modification. These companies already have in-house expertise and technology associated with silicon-based processes.

“Many of the CMOS semiconductor manufacturers already have excellent inspection tools, unlike traditional LED companies,” Cho said. “This could help increase their process yield through in-situ monitoring. However, it is unlikely the repurposing will happen overnight; instead we forecast a shift during the coming years.”