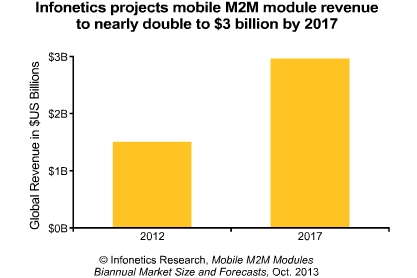 “The mobile M2M module segment of the M2M market scaled to new heights in 2012 and then again in the first half of 2013, but as with any evolving industry, this is happening amidst a dynamic, and at times challenging, environment,” notes Godfrey Chua, directing analyst for M2M and connected world at Infonetics Research.

Chua continues: “We expect the next 12 to 36 months to bring further industry consolidation and continued vetting of M2M business models. These factors, when coupled with macroeconomic issues including a tepid U.S. recovery and uncertainty in Europe and the ongoing transitions between technology platforms (2G to 3G to 4G), temper the near-term growth prospects of mobile M2M modules. Overcoming these challenges will be key to laying the foundation for the accelerated growth we anticipate in a few years.”

The other key findings shared by Infonetics includes:
GSM/GPRS/EDGE made up 59% of units shipped 1H13; this share will decline as the transition to 3G proceeds and eventually 4G accelerates
LTE will account for as much as 12% of mobile M2M module revenue by 2017
On the vendor front, activities such as Sierra Wireless’s acquisition of AnyData and Telit’s purchase of ILS Technology signal continued vendor consolidation
Turning in an especially strong performance in 1H13, North America remains the leading region for mobile M2M modules, followed by EMEA, Asia Pacific, and Latin America
Infonetics projects mobile M2M module revenue to almost double to $3 billion by 2017, a 2012–2017 compound annual growth rate (CAGR) of 14%

Iot
Bluetooth 5, a new market enabler for semiconductor and e...

Rf-microwave
Telit expands into short-range wireless by deciding to ac...

Rf-microwave
RF and opto expert MACOM gets into digital by acquiring A...

Rf-microwave
ABI: Bluvision is the leading BLE Beacon vendor in 2014

Rf-microwave
Microsemi to acquire Vitesse Semiconductor for US$389 mil...

Cellphone
Qualcomm to acquire CSR to speed-up its IOT growth

Cellphone
Infonetics: Half of mobile infrastructure revenue in 2Q14...

Medical
Bluetooth Smart is most used wireless in mobile health an...

Rf-microwave
802.11n/ac with MU-MIMO to give a big push to Wi-Fi market

Rf-microwave
RFMD and TriQuint to merge

Rf-microwave
Mobile health is biggest market for M2M, as per Strategy ...

Communication
Small cell backhaul equipment forecast: <0.5B in 2013 to ...

Rf-microwave
RFMD completes expansion of its packaging facility in China

Rf-microwave
Bluetooth BLE is predicted to overtake ZigBee by 2015

Rf-microwave
WLAN and Bluetooth are the most used in industrial automa...

Communication
Cellular M2M based VAS market to grow from $1.5B to 10B b...