If you look at the latest semiconductor IC chip fab, it's somewhat resembles like a spaceship on the earth. The inside atmosphere is nearly disconnected from outside atmosphere. The air inside the advanced semiconductor chip fab is conditioned in such a way that dust particles of size more than 1/100th of human hair is not allowed inside the chamber. The humidity, temperature and pressure is precisely controlled. The engineers and technicians working inside Fab are fully masked. This is how human being makes nanometer scale silicon IC chips for modern day computers, smart phone, tablet and many such intelligent devices to handle a minute part of the computation what our human brain can do. Just compare this to the way nature builds microorganisms to big banyan trees, they take birth in the open environment. Human being however advanced, they still are extremely inefficient in making things, that means there is a lot to learn from nature in designing/building systems. The vision system of an ordinary house-fly is far better than Camera integrated high definition visual system powered by multicore chips.

The basic difference is human-made computing machines use something called transistors and nature uses cells. Both are chemical preparations, transistors made by doping semiconductor material with dopants, whereas living cells are made up of complex organic chemicals with DNA.

Transistors solely depend on voltage and current variations to operate, there is no permanent change in chemical constituents, whereas in living cells there is a lot of chemical changes which also involve movement of electrons.

When semiconductor engineers trying to make chips smaller then 10 nm, they are facing multiple walls to proceed using the same lithography based chip making technology. They have reached the stage where the physical dimensions of living cells and the transistors are comparable.

To go further semiconductor industry is very much looking forward towards the way living cells are made, communicate and sustain. They need these technologies more so for economic benefit, and maintain the technology lead.

The research in this direction is to make the semiconductor devices work along with human cells. Something called implants which can be placed inside human beings and animals for medical purposes such as sensing health para meters, treating health deficiencies, delivering drugs in precise quantity etc.

One of the well known researcher in this field is Rahul Sarpeshkar, he has done good amount of research in this domain of bio-electronics or bio-chips, or any name you feel like giving by linking biology with electronics. He owns 30 patents and more than hundred of publications in this field. On the practical side, he was involved in the development of glucose powered medical implant.

In his multiple speeches and publications, Rahul has highlighted few very valid observations he has made while comparing field effect transistors with living cells.

Here are those few:

a. The power consumption by living cells in computing a bit of data is at least thousand times smaller than transistor-based logic circuit, because living cells communicate by the chemical reaction with exchange of few electrons, compared to thousands of electrons movement involved in FET logic circuit.

b. Living cells compute by using a combination of analog and a digital computing, where as in the present silicon computers, there is no analog computing, though there is analog interface to sense the outside world.

What researchers are also trying to achieve here is a technology fusion, where semiconductors and living cells get integrated together, a good practical example is cochlear implant used as hearing aid.

U.S. is advancing in this research area. Last week, U.S. based Semiconductor Research Corporation has announced the launch the Semiconductor Synthetic Biology (SSB) research program on hybrid bio-semiconductor systems to provide insights and opportunities for future information and communication technologies. The program will initially fund research at six universities: MIT, the University of Massachusetts at Amherst, Yale, Georgia Tech, Brigham Young and the University of Washington.

The research guided by the needs of semiconductor industry to stimulate non-traditional thinking in solving the issues and providing opportunities for developing next gen integrated circuits. A kind of enhancing development of disruptive technologies in semiconductor domain.

This collaborative effort is to focus on three areas, which are Cytomorphic-Semiconductor Circuit Design, Bio-Electric Sensors and Molecular-precision Additive Fabrication.

Rahul Sarpeshkar has commented "Controlled chemical reactions and molecular flows in cells are the ultimate miniaturization of electronics to the atomic and molecular scale.” on this development.

In the Biological sensors area, SRC effort is to integrate cells with CMOS technology to form a hybrid bio-semiconductor system that provides high signal sensitivity and specificity at low operating energy.

When the lithography technique hits the walls as the node geometry shrink to the 5nm, the molecular-based self-assembly can be used to assemble and wire nano devices.

DNA can be used as an active agent to provide information content to guide structure formation. SRC plans to pursue processes that will both improve fabrication yields and provide purification of correctly formed structures to significantly reduce the occurrence of defects in making DNA nanostructures, stated in the SRC release. 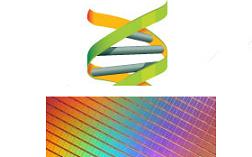 When the technology research moving in these directions, one question arises like they say in Hindi "e log kya kya kar rahe hi?", meaning "what what things these people are doing". When steam engine was invented it was a ha! Invention, now it is the dirtiest method of energy conversion. Instead of boiling water using coal directly it is converted into electricity to feed the power to electric stove for cooking, by using so called steam engines and generators, what a waste of energy. The same human-being also invented hydro-electric power generation, a some what better technology. So what is more important than research enthusiasm and immediate economic benefits, is the long term impact. The economics of technology when it is used at lesser scale and when it is used in mass scale is so different.

We care a lot less about environment, In fact we are disturbing the nature so badly that we need green houses to grow plants. Very essential these days in science and engineering research is, evaluation of long term side effects at the initial stage of innovation. Biochip research need to be evaluated in all aspects of application before making it practical.

Technology innovation is very important but to make the earth more livable.