Smartphones and tablets are the biggest chunk of consumer electronics market

IHS shares the below findings and analysis on this trend:

The below figure presents the IHS history and forecast of OEM factory revenue for all types of tablets and 3G/4G cellphones; factory revenue is defined as the total OEM dollar value of all branded devices or equipment in a market. The figure starts in 2007, the year that smartphone shipments surged due to Apple Inc.’s introduction of the first iPhone. The figure also presents the boom in revenue during 2010, the year that Apple kicked off the media tablet market with the introduction of the initial model of the iPad. 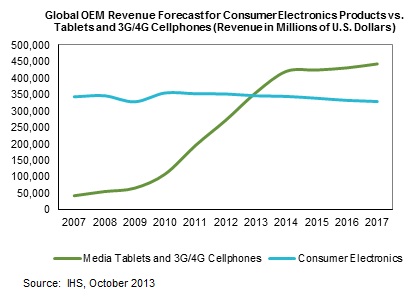 "Consumer demand for smartphones and tablets has been flourishing in the past few years while sales growth for CE products has languished in the doldrums,” said Randy Lawson, senior principal analyst for semiconductors at IHS. “The fact that these two product categories are on their own able to generate more OEM factory revenue than the entire CE market illustrates the overwhelming popularity of smartphones and tablets. Meanwhile, the CE market has gone flat, with many of the major product types experiencing either low growth or declines in revenue during the past six years.”

“Consumers simply are finding more value in the versatility and usefulness of smartphones and tablets, which now serve as the go-to devices for everything from phone calls, to photography, to navigation, to media playback, to fitness tracking. Because of this, smart mobile platforms are displacing sales of CE products such as digital still cameras, camcorders, GPS and media players.”

The rise of the smartphone and tablet markets has been remarkable, with OEM factory revenue expanding by a factor of nearly nine to $354.3 billion in 2013, up from $41.2 billion in 2007. Revenue this year will rise by a robust 31 percent.

However, the fast pace of growth is slowing, with revenue in 2014 increasing by only 18 percent to reach $418.6 billion. And with CE factory revenue declining in 2014, smartphones and tablets will expand their revenue lead dramatically, rising to a 22.2 percent advantage compared to the entire consumer electronics market. This gap will continue to widen and will reach nearly 35 percent in 2017.

In contrast, consumer electronics OEM factory revenue has been flat during the past few years, growing by slightly less than 1 percent from 2007 to 2013.

Of the 20 distinct CE product segments tracked by IHS, 14 will suffer a decline in their compound annual growth rates (CAGR) from 2007 through 2013. Some large product segments like LCD TVs are seeing growth in their revenue during that period. Even so, the CAGR for LCD TVs will be less than 10 percent, representing a major slowdown from the 83 percent rise seen during the previous six-year period from 2001 through 2007—the era of the global flat-panel TV replacement wave.

With LCD TV revenue starting to decline in 2014, the overall CE market is set for a long-term contraction as well. By the end of 2017, CE OEM factory revenue will slide to $327 billion, down 5 percent from the total in 2013.