IC Insights, which regularly does the market analysis of optoelectronics, sensor/actuator and discrete semiconductor market has announced its latest findings of this market for year 2013. Below are the key findings shared by IC Insights.

Several years after a strong recovery from the 2008-2009 downturn, the market for optoelectronics, sensors/actuators, and discrete semiconductors (O-S-D) is bumping and grinding its way toward another all-time peak in total sales this year. But just like last year, O-S-D sales growth in 2013 has been anemic and struggling to maintain momentum on a quarterly basis. See figure below. 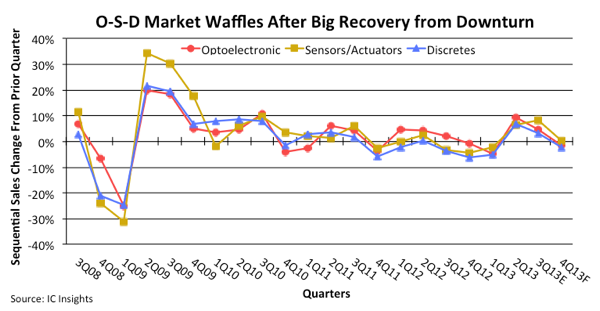 Due to ongoing uncertainty about the weak global economy, price erosion in key product categories, and low inventory levels at cautious system makers, total O-S-D sales are now expected to grow slightly less than 1% in 2013 to $58.6 billion after rising just 1% in 2012 to the current annual peak of $58.2 billion. These back-to-back annual sales increases of about 1% are nearly seven percentage points below the O S-D market’s compound annual growth rate (CAGR) of 7.8% over the past 15 years (1997-2012).

The growth rate for O-S-D sales this year is also substantially below the total IC market, which is expected to rise by approximately 6% in 2013 to $268.9 billion. Until now, O-S-D sales—driven by optoelectronics and sensor products—have exceeded annual IC market growth rates in eight of the last 10 years (with 2005 and 2007 being the exceptions). In 2013, price erosion in optoelectronics and sensors, along with falling power transistor sales, have pulled down O-S-D growth for a second year in a row.

Power transistors, which account for more than half of total discrete sales, are on track to drop 9% in 2013 after falling 8% in 2012—the first back-to-back annual market contraction in more than 25 years! The O-S-D market is also taking a hit from slow growth rates in some of its largest and (usually) strongest product categories—accelerometers and gyroscope sensors, high-brightness lamp devices (i.e., light-emitting diodes for solid-state lighting), and CMOS image sensors, which are being weighed down by sharp declines in average selling prices (ASPs). As seen in below figure, optoelectronics sales growth is expected to weaken to just 5% in 2013 from a solid 9% increase in 2012, while sensors/actuators are showing little improvement with a 2% rise this year, and the total discrete semiconductor market continues to head lower with an expected 6% decline, primarily due to the sliding revenues for power transistors. 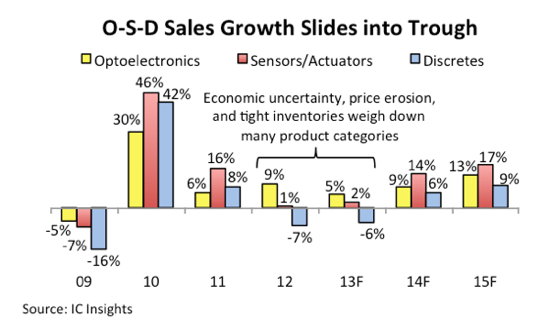 Even after this year’s subpar increase of 5%, optoelectronics sales are expected to reach a new record-high level of $29.3 billion in 2013, compared to the current peak of $27.8 billion in 2012, despite significant slowdowns in revenue growth for lamp devices (8% versus 18% in 2012) and CMOS image sensors (5% compared to 22% last year). In the sensors/actuators arena, price erosion continues to slow sales growth in the large product category of acceleration and yaw sensors (accelerometers and gyroscopes), which are now forecast to increase just 5% in 2013 compared a CAGR of about 24% over the last five years (2007 to 2012). The total sensors/actuators market segment is expected to reach a new record-high level of $8.9 billion in 2013, which is about 2% above the current peak of $8.7 billion set in 2012. When the three O-S-D segments are combined with projected IC sales, the total semiconductor market is expected to reach $327.5 billion in 2013, which would be a 5% increase from the $313.0 billion logged in 2012.