IC Insights has reported the total capital outlays by the Big 4 pure-play foundries are forecast to be $16.6 billion in 2013, which would represent 53% of their combined sales (Figure 1). This far exceeds the industry average of 18% capital-spending-to-sales ratio. The Big 4’s capital spending as a percent of “final sales” is forecast to be 24% in 2013, still well above industry average. 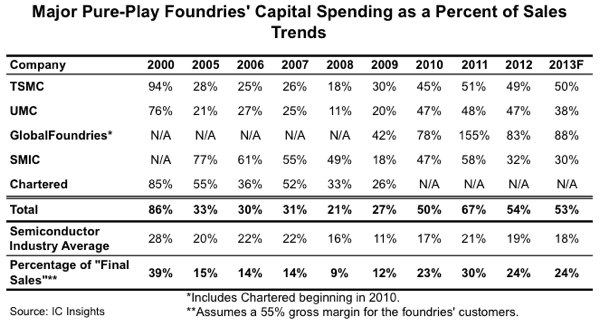 Figure 1 Below is the further analysis by IC Insights on this subject: A few years ago, TSMC stated that it planned to keep its capital spending at about 20% of its sales, but that was before GlobalFoundries and Samsung brought competitive pressure to the market and started chipping away at TSMC’s business. TSMC spent $5.9 billion in capital spending in 2010 (a budget that was increased twice in the first half of the year), an all-time record amount of capital spending for the company at that time. TSMC spent $8.3 billion in capital expenditures in 2012 and plans to further increase its capex spending to $10.0 billion in 2013. It appears that TSMC will be aggressive in its marketshare fight with GlobalFoundries and Samsung and is likely to greatly exceed its 20% of sales goal for capital spending outlays over the next few years. The question with regard to the expected combined 2011-2013 IC foundry spending by the Big 4 pure-play suppliers ($46.3 billion) is whether it is too much. As shown in Figure 1, the “final sales” capital-spending-to-sales ratio of the major foundries was a relatively low 14-15% in 2005-2007 before falling to only 9% in 2008 and 12% in 2009. In 2010, this figure rose to 23%, a level not seen since the boom year of 2004. Spurred by the surge in capital spending by TSMC and GlobalFoundries, this figure rose to 30% in 2011. For 2012, the capital spending as a percent of sales figure for the Big 4 foundries dropped back to a more “reasonable” 24%, with the same percentage expected for 2013. Given the major foundries high capacity utilization levels for leading-edge device production, it appears that current spending levels are warranted and should not lead to significant overcapacity issues. With demand for IC foundry services from fabless and fab-lite IDM companies expected to be high over the next five years, there is little doubt that demand for IC foundry production will remain strong. Overall, IC Insights believes that the pure-play foundry market will further divide into the leading-edge IC foundries like TSMC, GlobalFoundries, UMC, and Samsung, and the specialty foundries like TowerJazz, X-Fab, etc. Thus, the vast majority of future foundry capital spending can still be expected to come from the small group of major foundries targeting leading-edge IC production.