Total microprocessor market to rise by 8% in 2013, as per IC Insights

The figure below shows embedded microprocessors are now expected to account for 11% of MPU sales in 2013 (versus 9% previously), while tablet processors are projected to be 6% of the total (compared to 5% in the original January forecast), according to IC Insights. The new forecast by IC Insights keeps cellphone application processors at 26% of total MPU sales in 2013 but lowers the market share of non-x86 central processing units (CPUs) in computers outside of tablets to 1% (from 2% previously).
The processor IP vendor ARM's market share growth continue to rise in the processor market, particularly in the tablet and cell phone domain. 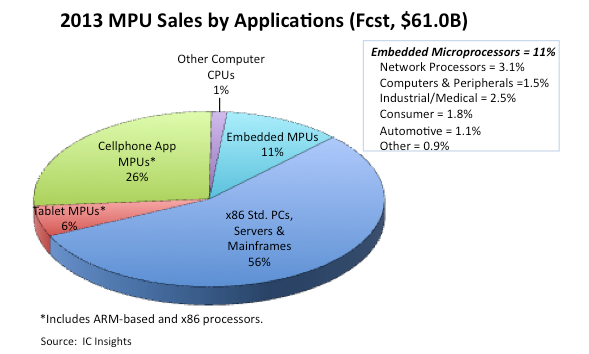 The new mid-year forecast from IC insight has rised tablet processor sales in 2013 to nearly $3.5 billion, which is a 54% increase from $2.3 billion in 2012. Cellphone application processor sales are estimated by IC Insights to grow by 30% in 2013 to $16.1 billion from $12.4 billion in 2012. At the start of this year, sales of mobile processors in tablet computers and cellphones were forecasted by IC Insights to grow 50% and 28%, respectively.

The mid-year forecast by IC Insights finds sales of MPUs in PCs, servers, large computers, and embedded applications slipping by 1% to $41.4 billion in 2013 from $41.9 billion in 2012, when revenues dropped 6%. IC Insights says this large MPU market segment was previously forecast to rebound with sales increasing 5%, but the anticipated bounce back has been blocked by weak shipments of standard PCs, which IC Insights believes will fall by 5% in 2013 to 327 million systems.

IC Insights projects shipment growth rate of 10% this year from a projection of 9% further processors used in PCs. IC insights finds the total MPU shipments are now expected to reach 2.15 billion devices in 2013, with tablet processors growing 62% to 190 million units and cellphone application processors increasing 11% to 1.50 billion this year. IC Insights’ microprocessor category does not include cellular radio-frequency baseband processors or stand-alone graphics processing units (GPUs), which are counted in the special-purpose logic/MPR category of the IC market.