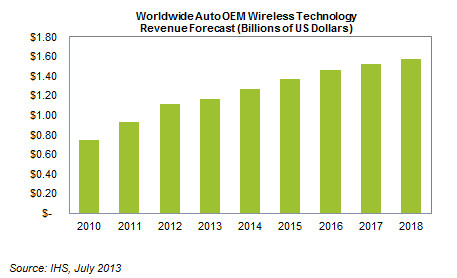 Analysis shared by IHS includes:
Revenue for wireless solutions in cars will reach a projected $1.17 billion this year, up a respectable 5 percent from 2011. While growth this year has moderated from the sizable double-digit increases of 2011 and 2012, continued expansion is assured in the years ahead. Expansions in the 8 percent range are expected during both 2014 and 2015.

“In the automotive market, wireless connectivity demand is racing ahead of older wired technologies as applications increasingly focus on supporting mobile devices and cellular communications,” said Luca DeAmbroggi, senior analyst for automotive infotainment at IHS. “For example, the USB legacy wired connectivity solution is being challenged by wireless mechanisms in cars such as Bluetooth for exchanging data between fixed and mobile devices over short distances, as well as embedded cellular for two-way wireless telematics connectivity.”

Bluetooth on a blue streak
Bluetooth will remain the standard wireless connection between consumer devices and the infotainment stack unit of a vehicle for the foreseeable future. The next generation of Bluetooth, or 4.0, will offer higher transfer speeds with the high speed (HS) option, while ensuring that gadgets stay paired longer and take up less power.

Data transfers taking place, however, will not be carried over the Bluetooth link itself but via a collocated 802.11 link through a competitive wireless technology—in this case, Wi-Fi.

It remains unclear if OEMs will prefer a decoupled solution for Bluetooth and Wi-Fi in cars, or if they will opt instead for a combo approach that optimizes cost and reduces the design workload. A separate chip approach is likely in the short term because of the still limited pull of Wi-Fi in automotive, IHS believes, even though the broader diffusion of wireless technologies points to integrated combo solutions being used in the future.

Embedded cellular makes a call
The wireless technology known as embedded cellular connectivity is also finding its way into the automotive market, with 25 percent of U.S. cars in 2012 sold with the feature, for the most part included as standard equipment. OEMs will increasingly want to use embedded cellular for both safety and diagnostic purposes, because the built-in wireless connectivity in cars will prove more robust and reliable than using a tethered or mobile device like a smartphone.

For instance, in the case of European eCall mandates that require cars to automatically ring for assistance during a vehicular accident, telematics solutions based on a mobile device will not be compliant with basic eCall specifications. Embedded cellular, however, will work with eCall in case of a vehicle crash.

Embedded cellular can also give auto makers a way to directly communicate with customers in cases like remote software upgrades, spare-parts management or vehicle recalls. Such an approach could allow OEMs to save money by centralizing communications and also pave the way for greater customer retention through tight management of car owners’ needs.

Among the most active players now working to enable an embedded cellular ecosystem in cars are Kia, Volvo, Daimler, BMW, Wireless Car, Vodafone and Verizon through its acquisition of Hughes Telematics.

Obstacle course for automotive wireless
Regardless of the wireless technology that will be used in cars, a number of issues and concerns must be taken into consideration prior to implementation. These include signal reception, electromagnetic interference, increasing system complexity because of varying wireless frequency spectrums, and regional differences and specifications. Such variables, in turn, will affect the cost of the wireless system and components to be included.

For instance, a new solution called Smart Antenna now in the process of thorough evaluation would imply an architectural change. In this case, the antenna would become more of an “active” unit able to integrate several antenna technologies, working alongside tuners, transceivers and digital bus interfaces to connect the antenna box to a designated end device.

An approach in which the antenna box is mounted on car roofs could allow savings for vehicle manufacturers of up to $30 because the use of coaxial cables would be reduced—illustrating how a specific solution can have a direct bearing on overall costs.