Fall in semiconductor inventory in Q1, as per IHS 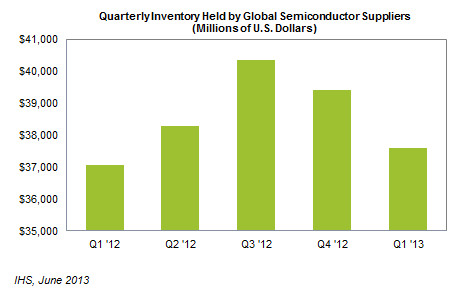 Other info shared by IHS on this subject includes:

The decline in inventory paralleled the contraction in semiconductor revenues, which fell 5.1 percent sequentially, following the normal seasonal demand pattern.

“While overall chip revenue declined in the first quarter, falling inventories among chip suppliers—combined with expanding stockpiles at distributors, contract manufacturers and original equipment manufacturers (OEM)—indicate that consumer demand for electronics rose during the period,” said Sharon Stiefel, analyst for semiconductor market intelligence for IHS. “This contributed to a decline in chip inventories. At the same time, semiconductor companies maintained tight control over their manufacturing capacity, contributing to the decline in inventory.”

Signs of strength from PC and cellphone OEMs
Throughout the electronics supply chain, the largest increases in inventory were posted by cellphone and PC OEMs. Cellphone makers expanded their inventories—including finished smartphones—by 7.2 percent during the quarter. For their part, PC OEMs expanded their stockpiles of items including notebook and desktop computers by 6 percent.

The increase in OEM, contract manufacturing and distributor inventories during the first three months of the year contrasted sharply with the fourth quarter of 2012 when these segments trimmed their stockpiles.

“The rise in inventories among the various segments of the supply chain indicates the electronics industry is preparing for an increase in demand during the second half of 2013,” Stiefel said.

It’s the economy
Overall global economic indicators point to growth during the coming quarters, mainly in the developing nations. This is incentivizing semiconductor companies and their customers to load factories in the second quarter to keep up with the demand for second-half shipments.

Semiconductor inventory levels are expected to rise in the second quarter in response to the positive order rates from electronics equipment manufacturers, whereas stockpiles for consumers of semiconductors likely will remain fairly flat.