Japanese electronics conglomerate Panasonic is presenting an innovative VLSI technology design at 2013 Symposia on VLSI Technology and Circuits to be held at the Rihga Royal Hotel Kyoto, Japan on June 11-14, where the digital signals are handled as analog signal. By using ferroelectric memristor, the continuous analog data as resistance is recorded on a CMOS (Complementary Metal-Oxide Semiconductor) circuit. Since processing analog data directly, huge power saving is achieved. These neural network type circuits have the ability to carry out processing that replicates parts of human thought, such as the ability to make judgments based on broad trends, will decrease drastically to one tenth of the energy consumption of conventional circuits, says Panasonic.

Panasonic explains "The resistance of a ferroelectric memristor can be changed continuously by an applied voltage. As the resistance is maintained without applying a voltage, it acts as a memory device. Therefore, as the device can store data as an intermediate value rather than a binary value (1/0), it is able to store more information than digital memory. Based on this large amount of information stored, through carrying out operations on the efficient analog data, it is possible to reduce the energy consumption as the amount of data to be processed increases. This development will contribute to the realization of a signal processing circuit which mimics the processing of neurons in the brain."

Panasonic says it holds 35 Japanese patents and 25 overseas patents, including pending applications, for this development. 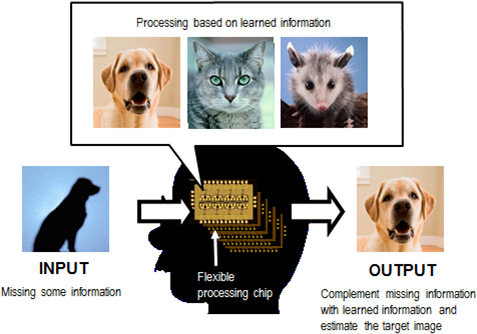 The image of the future information processing
with this developed technique.