“ODMs and distributors are striving to keep a minimal amount of computers in stock partly because once-dominant PCs have now been upstaged in the minds of consumers by mobile devices like smartphones and tablets,” said Sharon Stiefel, analyst for semiconductor market intelligence at IHS. “Global PC shipments fell last year for the first time in 10 years, while shipments of smartphones and tablets continued to boom. Because of this, companies are attempting to minimize future risk by keeping inventories of unsold products at low levels.”

Below is the data and analysis shared by IHS on inventory in the PC supply chain:

The figure below presents DOI held by the various segments of the PC supply chain in the fourth quarter on average during the previous six years. The DOI measure in this figure applies to the goods and subcomponents manufactured by each industry. For example, for semiconductor suppliers, this means chips and integrated circuits; for PC distributors and ODMs, it applies to complete computers. 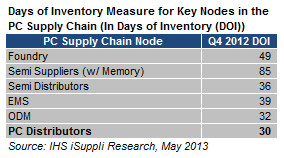 This year’s model
Aside from rising risk, the business model used by PC ODMs and distributors lends itself to maintaining low inventory levels.

PC manufacturers and distributors are likely to only have stock that can move quickly to the consumer. Shelf life is short for computers given that PC models change frequently, so it becomes undesirable to keep finished goods for any length of time. And for PC distributors in particular, inventory needs to come in and then go straight out as quickly as possible, which partly explains why they have the smallest DOI of all participants in the PC technology chain.

Semi stockpiles swell
Semiconductor suppliers possessed the largest amount of inventory in the PC supply chain in the fourth quarter.

From the fourth quarter, semiconductor suppliers held the greatest amount of stockpiles at 85 days on average.

Semiconductor manufacturers are able to keep a greater amount of inventory—in the form of raw materials, work-in-progress or finished goods—as these items are much lower in cost on absolute terms than other products being made further down the supply chain.

In general, semi manufacturers need to have on hand a certain amount of raw materials to be more nimble and adjust quickly to demand for end customers. Even work-in-progress and finished goods can be redirected toward other customers should demand change during the manufacturing cycle, as parts can be re-marked for a different requirement that fits within device specifications.

Foundry flexibility
In contrast to the PC and contract manufacturing nodes, foundry suppliers can be more flexible with their store of stockpiles, an advantage that allows them to hold a larger amount of inventory and redirect toward demand if needed.

Among semiconductor suppliers, companies with a stronger market share in discrete and analog technologies are more comfortable in holding a larger-than-average DOI. This is due to predominance in their product portfolio of catalog devices such as high-volume commodities, which tend to possess a longer shelf life.