NPD DisplaySearch has reported LED lighting applications will double the market, from 16 million units in 2012 to a forecasted 33 million in 2013, and will nearly triple by 2016.

The other findings and analysis shared by NPD DisplaySearch:

The demand for all LED lighting products—including spot lights, LED luminaries, street lights, LED light bulbs and fluorescent tubes—will reach 90 million in 2016, increasing the global penetration for LED lighting applications to 26% in 2016, up from only 5% in 2012. This increase is due in large part to continued growth in commercial applications, government incentive programs, and consumer demand for energy-saving technology. The highest growth will be in LED-based tubes that replace fluorescent (FL) tubes used in commercial applications, LED-based street lights, and LED luminaires–innovative designs that produce light across various shapes and sizes. 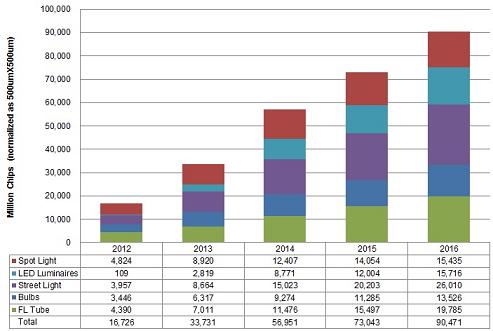 “LEDs are playing a leading role in the lighting industry, driven primarily by government incentive policies and consumer demand for more efficient light sources with advanced technologies such as wireless and color control,” noted Steven Sher, Analyst, NPD DisplaySearch. “This increased demand will manifest over the next three years, as consumers look to replace their traditional light bulbs with more efficient LED lighting options.”

Japan and China Lead LED Lighting Demand : Japan has been the largest market for LED lighting applications since 2011, and NPD DisplaySearch projects this dominance will continue through 2016, driven by the adoption of LED bulbs, spot lights, fluorescent tubes, and luminaires. LED lighting growth in China will be higher than other regions from 2012 to 2016 due to government policies such as the 12th Five-Year Plan, which is already driving demand for LED street lights. North America and Europe are also experiencing increased demand for LED lighting applications through 2016, particularly for LED fluorescent tubes. 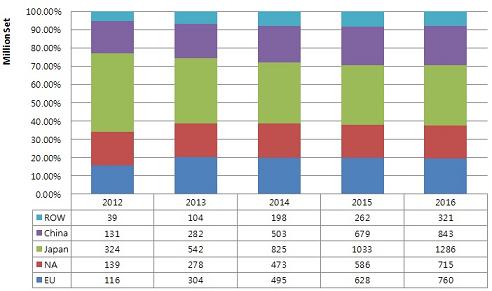 The market opportunity for LED lighting is playing out in the context of a stagnant market for LEDs in LCD backlighting, currently the largest application for LEDs. In 2014, general illumination will pass display backlighting as the largest application for LEDs. In addition, the market for LED chips has been in oversupply as LED makers have invested heavily in MOCVD equipment, particularly in China. The surplus has caused competition to intensify and prices to drop dramatically, leading to higher LED penetration in lighting, but lower profits for LED makers. This has led many LED makers to pursue vertical integration, in which the LED chip makers integrate the chip, phosphor, and control circuits to make lighting engines, and in which LED package makers integrate the lamp assembly. Success in the lighting market requires technical integration, but also optical design and the development of brand and channel strategies.

Opto
GaN-on-Si LED market forecasted to increase at a CAGR of ...