SoC from Fujitsu for 360 Degree wraparound view of car surroundings

Fujitsu Semiconductor has designed a SoC chip coded MB86R24 for processing video data from cameras around the car to produce a 360 Degree wraparound view. MB86R24 has 6 full HD input channels and 3 display output channels to help detect the objects approaching the car and notifies drivers of nearby people, bicycles and other objects by providing a 360° Wraparound View System that allows drivers to check their entire surroundings in 3D from any angle.

This chip will also support development of integrated Human Machine Interface (HMI) systems that consolidate and provide centralized control over a variety of onboard vehicle information. Until now, the display of such information on multiple screens has been controlled independently for each screen, says Fujitsu.

The 360° Wraparound View System uses cameras facing forward, backward, left, and right to synthesize a 3D model of the environment and then display the surroundings from any perspective (Figure below). 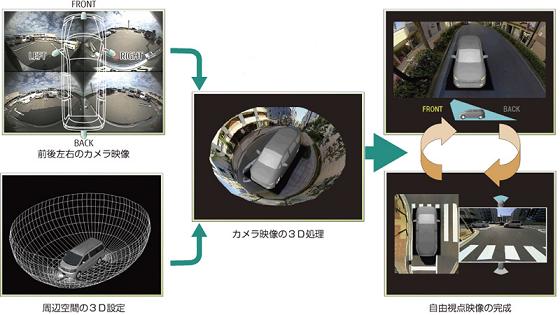 Product Features:
The CPU employs two ARM Cortex-9 cores along with the PowerVR SGX543 3D graphics, enabling roughly double the CPU performance and 5 times the GPU performance of its predecessors. MB86R24 also features Fujitsu Semiconductor's proprietary 2D graphics engine. Since the 3D and 2D graphics engine each run independently of one another, it is possible to obtain even greater graphics processing performance.

In addition to a 2D engine, 3D engine, and video capture function, all of which can be run simultaneously, the new SoC features 8 rendering layers, making it possible to perform graphics processing on different layers that is optimized to meet the needs of specific applications and content.

Automotive
Extremely narrow beam capable LiDAR for use in autonomous...

Automotive
256 Kbit FRAM with SPI interface operates up to temp of ...

Automotive
Automotive grade NOR flash memory withstand up to 125°C

Automotive
Unipolar hall-effect switch from Allegro for automotive a...

Automotive
Design for a 360 degree view of car surrounding

Automotive
ST's software stack for its video SoC is compliant with G...

Automotive
5G Wi-Fi and Bluetooth chip connects car with rest of the...

Automotive
The component/system behind self driving cars

Automotive
QNX software and SoC from Renesas for car to support each...