With the exponential growth of computing resources and capabilities, picture recognition and speech recognition is no more that daunting task. The lowest costing smart phone to cheap notebooks sold now in the market have enough capabilities at the edge side to process voice and video.  Even if you have a simple and basic system with just microphone, encoder and a simple processor to connect (high-speed) audio and video data to a cloud computer, you can very well have speech and picture recognition with such systems.

In this article let's look at properties of an audio speech signal in such a way that computer can understand and convert into text equivalent of that speech.

Let's try to find out what is the dictionary meaning of the word ‘audio’. Audio is anything related to sound what we people can hear. So the speech, voice, sound is all audio. Generally accepted audio frequency band is in the range  of 20 Hertz - 20,000  Hertz. This is the frequency band human ear can sense.  An audio sound where we can't really make out anything and annoying is noise, better call it as audio-noise, since we also have noise in other frequency bands.

An audio signal can be recorded, transmitted and re-played. We human beings can produce sounds using vocal cords with the support of lungs, tongue, mouth, nose, and throat. However for hearing it's only the ear, an exclusive organ for hearing purpose. Two electromechanical device equivalents for human talk-sys and ears are  electromagnetic speaker, and microphone.

In this first article, we will be touching upon various electrical properties of analog audio signal. Which is important to understand to process the audio in digital domain.

Using Cathode-ray oscillo - scope (CRO) is the best way to see the audio signal. Below is the amplitude versus time plot of the spelled English alphabet 'D' displayed on CRO. 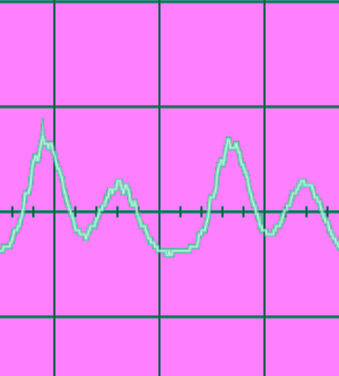 From the picture above you can make out, it is a alternating current signal with multiple frequency tones  with different amplitudes. Another best way to plot audio signal is to show three-dimensional graph with frequency on y-axis, time on x-axis and a brightness level as third dimension indicating amplitude. Such a device is called spectrogram.

Below is a spectrogram capture of pronunciation of English alphabet 'D'. 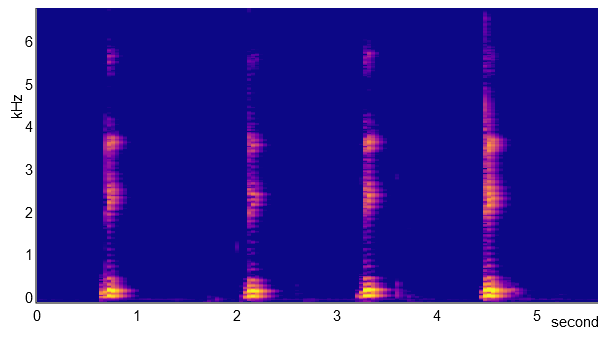 The closest Indian alphabet to English alphabet D is  'ड' in Hindi, ‘ட” in Tamil, ‘డ’  in Telugu and  ‘ಡ’ in Kannada.  Below is the plot of amplitude versus time (CRO) for this Indian alphabet. 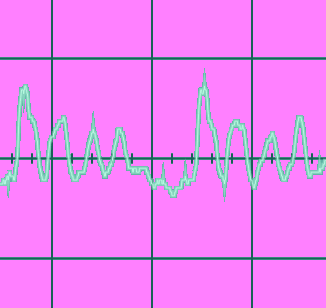 Below is the spectrogram picture  of  Pronunciation Indian alphabet pronounced ‘Da’ 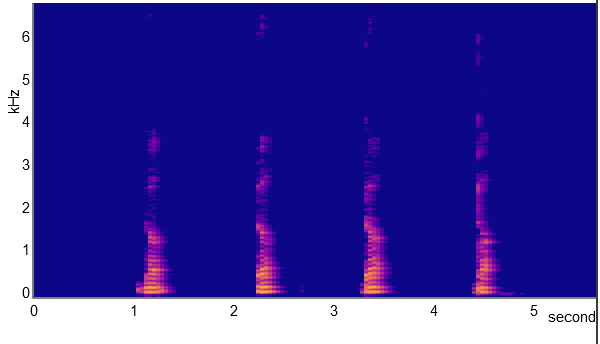 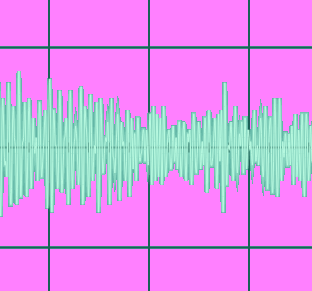 Below is a spectrogram  for the pronunciation of alphabet ‘S’ 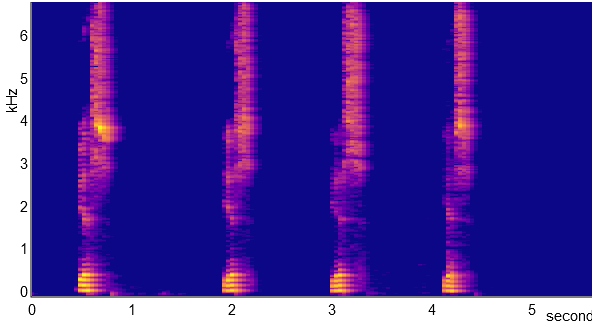 Let’s look at each electrical parameter of audio signal:

Amplitude:  Average amplitude of an audio signal indicates how loud is the voice/audio signal. By using various electronics circuit design techniques you can normalize the amplitude either by amplifying or attenuating the signal, what is important is the amplification recognition should be applied uniformly across all frequency bands. One more important thing is, if there is an audio noise, or a mix of multiple audio sources,  the decibel levels of  unwanted audio and noise  should be significantly lower than the required audio.  Various signal processing techniques (both digital as well as analog) can be used to suppress or even eliminate noise.

Logarithmic system of measuring is used to  measure sound. It  is called decibel A scale measurement system.  This is based on the relative loudness perceived by the human ear. A dBA value of below 10 is barely audible, example of dBA value of below 10 is “pin dropping”. When we compare  silence, we say  “pin drop” silence, so that means it is below 20 dBA.  A normal conversational speech  comes in the range of 50- 70 dBA.  To give you  more idea on loudness, a rock band produce  sound of 110 dBA, and a jet engine takeoff produces a sound of 140 dBA.

You can see in spectrogram plot of pronunciation of alphabet ‘D’ in one of the above pictures,  number of multiple frequencies in the range of 200 to 400 Hz have higher amplitude compared to frequencies in the range of 2 to 4 Kilo hertz.  So, for digital or any other electronic systems,  to process  an audio  signal and decide as alphabet  ‘D’, it  should match the pattern  either  graphically   or other mathematical methods. Amplitude is a key parameter to recognize  an audio signal.

Frequency: Anything below 20 Hz and above 20 KHz is not audible and should be eliminated.  Much of the voice falls in the frequency range of 300 Hz to 4000 Hertz. The plain old telephone system used to work in the frequency range of 300 Hz to 3400 Hz.  The human voice consists of multiple tones of frequencies. You can clearly make out from  the pictures above, where the spectrogram and CRO amplitude versus time plots for English alphabets ‘D’ and  ‘S’ are so different in terms of frequency bands. When two  alphabets have such a difference, you can imagine how complex it will be for a string of words.  It looks a lot fuzzier.  Mathematically we use Fourier transform or any such time to frequency transformers to find out various sinusoidal frequencies forming that signal.  Modern digital electronics using DSPs can do this job of identifying frequencies. So, frequency vs time plot is centre part of speech recognition systems.

Timing: Since speech is a string of words and alphabets, the timing data of occurrence of  a particular frequency and amplitude is another key attribute for speech recognition.

Speech recognition looks complex but doable. But the real challenge is the accent. That is computer should be able to recognize slightly misspelled words, that is a huge challenge.  That’s where artificial intelligence tools come in.

Read the next article on digitizing of analog audio signal. :

Memory
The basic elements of digital circuits: MOSFET, gate and ...

Reference-design
Mobile Application Trends and the Impact on Mobile Platforms

Power-supply
Design of audio amplifiers: selection guide for Class-D a...

Aerospace-defense
Why engineers going for FPGA rather than ASIC?

Iot
Brief introduction to the restriction of harmful material...

Passives
Virtual Instrumentation - Changing the Face of Design, Me...

Processor
Learn FPGA design to develop your own customized embeddd ...

Student
The next generation of NonVolatile RAMs (NVRAM)

Memory
Embedded Systems Course- module 17: Basics of LCD and it...