Introduction: During the desktop PC design era, VLSI design efforts have focused primarily on optimizing speed to realize computationally intensive real-time functions such as video compression, gaming, graphics etc. As a result, we have semiconductor ICs  integrating various complex signal processing modules and graphical processing units to meet our computation and entertainment demands. While these solutions have addressed the real-time problem, they have not addressed the increasing demand for portable operation, where mobile phone need to pack all this without consuming much power. The strict limitation on power dissipation in portable electronics applications such as smart phones and tablet computers must be met by the VLSI chip designer while still meeting the computational requirements. While wireless devices are rapidly making their way to the consumer electronics market, a key design constraint for portable operation namely the total power consumption of the device must be addressed. Reducing the total power consumption in such systems is important since it is desirable to maximize the run time with minimum requirements on size, battery life and weight allocated to batteries. So the most important factor to consider while designing SoC for portable devices is 'low power design'.

Is Power Really a Problem?

Scaling of technology node increases power-density more than expected. CMOS technology beyond 65nm node represents a real challenge for any sort of voltage and frequency scaling starting from 120nm node, each new process has inherently higher dynamic and leakage current density with minimal improvement in speed. Between 90nm and 65nm, the dynamic power dissipation is almost same whereas there is ~5% higher leakage/mm2. Low cost always continues to drive higher levels of integration, whereas low cost technological breakthroughs to keep power under control are getting very scarce.

Modern System-on-Chip demand more power. In both logic and memory, static power is increasing really fast and dynamic power is also rising. Overall power is dramatically increasing. If the semiconductor integration continue to follow Moore's Law, the power density inside the chips will reach far higher than the rocket nozzle.

Do We Need To Bother With Power?

Power dissipation is the main constrain when it comes to portability. The mobile device consumer demands more features and extended battery life at a lower cost. About 70% of users demand longer talk and stand-by time as primary mobile phone feature. Top 3G requirement for operators is power efficiency. Customers want smaller and sleeker mobile devices. This requires high levels of silicon integration in advanced processes, but advanced processes have inherently higher leakage current. So there is a need to bother more on reducing leakage current to reduce power consumption.

Why Power Matters in SOC?

The power dissipation in circuit can be classified into three categories as described below.
Dynamic power consumption: Due to logic transitions causing logic gates to charge/discharge load capacitance.
Short-circuit current: In a CMOS logic P-branch and N-branch are momentarily shorted as logic gate changes state resulting in short circuit power dissipation.
Leakage current: This is the power dissipation that occurs when the system is in standby mode or not powered. There are many sources of leakage current in MOSFET. Diode leakages around transistors and n-wells, Subthreshold Leakage, Gate Leakage, Tunnel Currents etc. Increasing 20 times for each new fabrication technology. Insignificant issues are becoming dominating factors.

The growing market of portables such as cellular phones, gaming consoles and battery-powered electronic systems demands microelectronic circuits design with ultra low power dissipation. As the integration, size, and complexity of the chips continue to increase, the difficulty in providing adequate cooling might either add significant cost or limit the functionality of the computing systems which make use of those integrated circuits. As the technology node scales down to 65nm, there is not much increase in dynamic power dissipation. However the static or leakage power reaches or exceeds the dynamic power levels beyond 65nm technology node.

Hence the techniques to reduce power dissipation is not limited to dynamic power. In this article we discuss circuit and logic design approaches to minimize dynamic, leakage and short circuit power dissipation. Power optimization in a processor can be achieved at various abstract levels . System/Algorithm/Architecture have a large potential for power saving even these techniques tend to saturate as we integrate more functionality on an IC. So optimization at Circuit and Technology level is also very important for miniaturization of ICs.

Total Power dissipated in a CMOS circuit is sum of dynamic power,short circuit power and static or leakage power. Design for low-power implies the ability to reduce all three components of power consumption in CMOS circuits during the development of a low power electronic product. In the sections to follow we summerize the most widely used circuit techniques to reduce each of these components of power in a standard CMOS design.

Dynamic/Switching power is due to charging and discharging of load capacitors driven by the circuit. Supply voltage scaling has been the most adopted approach to power optimization, since it normally yields considerable power savings due to the quadratic dependence of switching/dynamic power Pswitching on supply voltage VDD. However lowering the supply voltage affects circuit speed which is the major short-coming of this approach. So both design and technological solutions must be applied to compensate the decrease in circuit performance introduced by reduced voltage. Some of the techniques often used to reduce dynamic power are described below.

In adiabatic circuits instead of dissipating the power is reused. By externally controlling the length and shape of signal transitions energy spent to flip a bit can be reduced to very small values. Since diodes are thermodynamically irreversible they are not used in the design of Adiabatic Logic. MOSFETs should not be turned ON when there is significant potential difference between source and drain. And should not be turned off when there is a significant current flowing through the device. 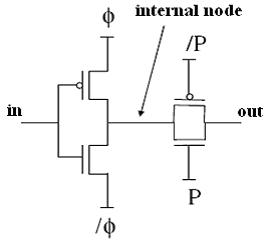 Logic Design for Low Power
Choices between static versus dynamic topologies, conventional CMOS versus pass-transistor logic styles and synchronous versus asynchronous timing styles have to be made during the design of a circuit. In static CMOS circuits, the component of power due to short circuit current is about 10% of the total power consumption. However in dynamic circuits we don't come across this problem, since there is no any direct dc path from supply voltage to ground. Only in domino-logic circuits there is such a path, in order to reduce sharing, hence there is a small amount of short-circuit power dissipation. 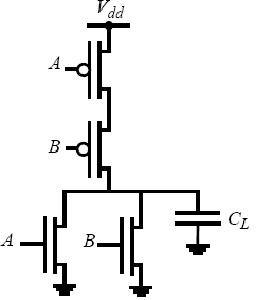 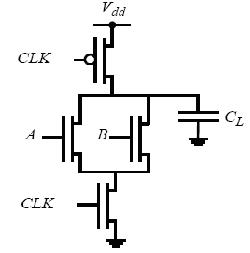 Figure 5(b): Dynamic NOR circuits

Similarly we can use pass transsitor logic to exploit reduced swing to lower power (e.g., reduced bit-line swing in memory). 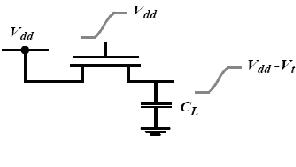 Glitches occur in a logic chain when two parallel driving common gate arrive at different times. The output momentarily switches to incorrect value before settling to correct result. Consider circuit shown below. Let us assume that in the absence of buffer path A is high speed and Path B is slow. Initially if A=0 and B=1 then Z=0.Next if B is to switch to 0 and A to 1 since B is slow the data 0 arriving at B will be slow and hence Z switches towards 1 momentarily before switching back to 0 resulting in power dissipation.

Figure7: Glitch Free AND Gate
As shown in figure above buffers are generally used to delay path A to overcome glitches

Logic Level Power Optimization
During logic optimization for low power, technology parameters such as supply voltage are fixed, and the degrees of freedom are in selecting the functionality and sizing the gates. Path equalization with buffer insertion is one of the techniques which ensures that signal propagation from inputs to outputs of a logic network follows paths of similar length to overcome glitches. When paths are equalized, most gates have aligned transitions at their inputs, thereby minimizing spurious switching activity/glitches (which is created by misaligned input transitions). 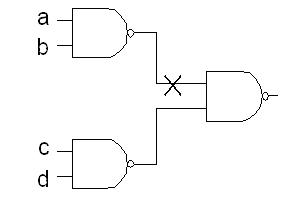 Other logic-level power minimization techniques include local transformations as shown in figure above. A re-mapping transformation is shown, where a high-activity node (marked with x) is removed and replaced by new mapping onto an and or gate.

Static/Leakage power, originates from substrate currents and subthreshold leakages. For technologies 1 µm and above , PSwitching was predominant. However for deep-submicron processes below 180nm, PLeakage becomes dominant factor. Leakage power is a major concern in recent technologies, as it impacts battery lifetime. CMOS technology has been extremely power-efficient when transistors are not switching or in stand-by mode, and system designers expect low leakage from CMOS chips. To meet leakage power constraints, multiple-threshold and variable threshold circuit techniques are often used. In multiple-threshold CMOS, the process provides two different threshold transitors. Low-threshold are employed on speed-critical sub-circuits and ther are fast and leaky. High-threshold transistors are slower but exhibit low sub-threshold leakage, and they are employed in noncritical/slow paths of the chip. As more transistors become timing-critical multiple-threshold techniques tend to lose effectiveness.

Variable-threshold circuits dynamically control the threshold voltage of transistors through substrate biasing and hence overcome shortcoming associated with multi-threshold design. When a variable-threshold circuit is in standby, the substrate of NMOS transistors is negatively biased, and their threshold increases because of the body-bias effect. Similarly the substrate of PMOS transistors is biased by positive body bias to increase their Vt in stand-by. Variable-threshold circuits can, in principle, solve the quiescent/static leakage problem, but they require control circuits that modulate substrate voltage in stand-by. Fast and accurate body-bias control with control circuit is quite challenging, and requires carefully designed closed-loop control. When the circuit is in standby mode the bulk/body of both PMOS and NMOS are biased by third supply voltage to increase the Vt of the MOSFET as shown in the Figure. However during normal operation they are switched back to reduce the Vt. 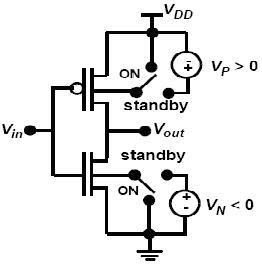 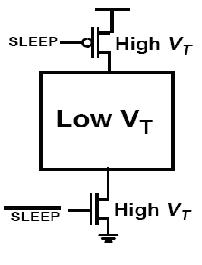 In dynamic threshold CMOS (DTMOS), the threshold voltage is altered dynamically to suit the operating state of the circuit. A high threshold voltage in the standby mode gives low leakage current, while a low threshold voltage allows for higher current drives in the active mode of operation. Dynamic threshold CMOS can be achieved by tying the gate and body together. The supply voltage of DTMOS is limited by the diode built-in potential in bulk silicon technology. The PN diode between source and body should be reverse biased. Hence, this technique is only suitable for ultralow voltage (0.6V and below) circuits in bulk CMOS. 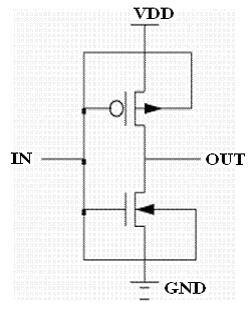 Short-circuit power, is caused by the short circuit currents that arise when pairs of PMOS/NMOS transistors are conducting simultaneously. In static CMOS circuits, short-circuit path exists for direct current flow from VDD to ground, when
VTn< Vin< VDD-|VTp| 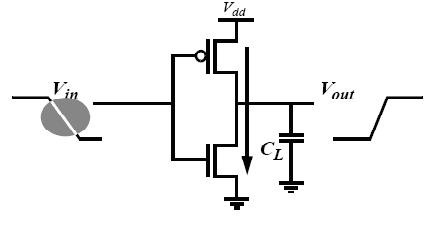 Embeddedcomputer
Mobile Application Trends and the Impact on Mobile Platforms

Computer
Design of audio amplifiers: selection guide for Class-D a...

Consumer
Why engineers going for FPGA rather than ASIC?

Interconnect
Brief introduction to the restriction of harmful material...

Rf-microwave
Virtual Instrumentation - Changing the Face of Design, Me...

Security
Learn FPGA design to develop your own customized embeddd ...

Memory
The next generation of NonVolatile RAMs (NVRAM)

Automotive
Embedded Systems Course- module 17: Basics of LCD and it...