Flash memory vendors are trying hard make flash memory chips further denser, while other disruptive nonvolatile memory technologies are fast emerging. Some of the start-ups in the areas such as resistive random access memory (ReRAM) are continuously pushing the boundary of performance so that they can take over solid state memory space from flash. What is really driving the solid-state memory market is the need for huge memory storage both for personal as well as enterprise usage. Most of the market estimations point that the amount of data created replicated and consumed to reach 50 ZB ( zetta bytes) in 2020. Flash memory alone cannot serve this big market.

The further integration going much in the vertical line (y-axis) and very less in the x-axis. The multi-storey flash memory is the future as of now, at least for some years. The leading flash memory vendors such as Samsung, LG, Micron, and Toshiba all have invested huge amount in 3-D Flash memory fabrication.

They are not only integrating flash memory alone in the cube, they are also integrating the DRAM with Flash memory to make a single device for Solid-state memory. To go further advance, semiconductor vendors are also trying to pack SOC, DRAM and flash memory in one single device one stacked over the other. This trend is clicking well in the market, where the 3-D semiconductor packing all the logic and memory in single IC saves space, increases speed. But the cost reduction may not be that high. So to some extent this is another way around to extend Moore's Law.

What if a single memory can do both the functions of DRAM, and flash memory and even to some extent SRAM. That wish can be fulfilled due to the advancement of other nonvolatile memory technologies, mainly ReRAM. They are having difficulties in achieving density and cost of manufacturing. Cost of manufacturing can come down with the volumes go up 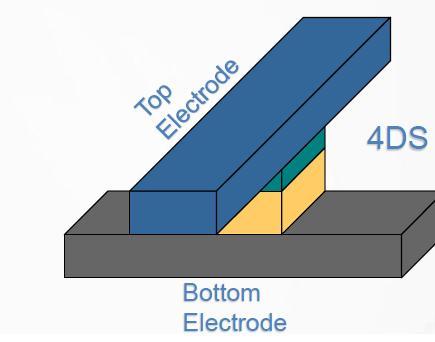 Pic above: ReRAM cell by 4DS

With the density and cost of ReRAM memory beating flash memory ReRAM can replace flash memory. ReRAM memory Startup 4DS Is trying hard to make ReRAM to beat flash memory in density. In a latest achievement, 4DS Memory Limited developed and tested 40 nm interface switching resistive random access memory (ReRAM) cells. This is significant announcement according to 4DS, the reason is, the density of 40 nm -based ReRAM can be better than 3D NAND Flash (3D Flash). Dr Guido Arnout, CEO and managing director of 4DS says 40 nm ReRAM cells are significantly smaller than current volume production scale of 3D Flash memory of between 45nm and 50nm.

The real advantage of scaling down to 40 nm is the ReRAM wafers can be stacked into 3-D structures. This enables ReRAM to get into storage class memory for use in cloud platforms and mobile computing platforms.

4DS achieved 50nm ReRAM cell in February 2016. 4DS says it expecting interest in this technology from top memory manufacturers such as Samsung, Micron and SK Hynix.

Other companies who are into ReRAM technology in the market are Cross Bar, Weebit Nano, Adesto Technologies, Strategic Elements. Each of these companies use their own variants of ReRAM.

The Micron ( in partnership with Intel) is also into ReRAM chip development, and might soon launch news ReRAM based memory.

4DS has been developing its patented Interface Switching ReRAM, also known as Non-Filamentary ReRAM, by partnering with Western Digital (Western Digital acquired Sandisk in 2016) subsidiary HGST for the past two years under a joint development agreement (JDA).

Western Digital is to use 3D ReRAM memory technology for its storage class memory applications .

The other nonvolatile memory technologies competing with ReRAM includes phase change memory (PCRAM), and magnetic RAM (MRAM). ReRAM looks to be leading to replace Flash. Samsung has invested more in PCRAM market. FRAM is already commercialised but has limitation in terms of size and cost. FRAM is already used in embedded systems , and are integrated on-chip with microcontrollers.

ReRAM seems to be picking higher speed among the race in the nonvolatile memory market. The flash story ends if ReRAM replaces successfully.