A start-up named KnuEdge Inc, which was operating in stealth mode has announced a brain like processor chip and software for military grade voice recognition and authentication. Daniel Goldin, who had earlier headed National Aeronautics and Space Administration (NASA), has founded KnuEdge. 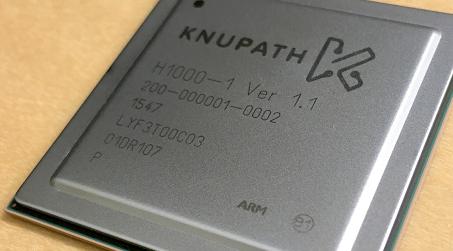 The new chip named Knupath Hermosa processor is fabricated using 32 nm semiconductor technology, which may be using some of the ARM's IP (based on the picture of the chip). The processor architecture inside is fundamentally different from the present processor architectures such as Von Neumann. Knupath is a 256 DSP-like core artificial intelligence (AI) chip due to its ability to learn C++ Software and get in to machine learning and deep learning process. The chip uses heterogeneous architecture and data flow across different elements of chip is different from the present bus like architecture, which is a bottleneck for a complex neuron like computing. Does this chip use on-chip photonics for instantaneous communication between processor cores! May be the architecture supports such future implementations, Well it’s a practical guess. The chip uses some of the biological principles. No wonder, if this uses lot of vector processing. By using a technology called LambaFabric which is designed to scale up to 512,000 devices has a latency of 6 ns inside the chip cluster, 62 ns inside the Hermosa processor, 247 ns inside the system board, rack-to-rack latency of only 400ns, and low-wattage, says KnuEdge in its website www.knuedge.com This chip is supported by software and other technologies for foolproof and noise-proof voice recognition. KnuVerse is the defence/military grade voice recognition authentication technology developed by KnuEdge. KnuEdge has already generated around US dollar 20 million revenue and is supported by angel investors, whose name is not yet declared. From voice biometrics, to enabling digital assistants for those people who cannot read and write are the new areas targeted by this new neuron architecture like chip maker. So does this means, the leading chipmakers such as Intel, TI, STMicroelectronics, Renesas now are lagging behind, not really so, today's trend is AI. Most of the processor architectures from Intel to ARM and some other start-ups going the way what KnuEdge has already announced. It is just a matter of little behind. Google's own chips are also something like Knupath. Knupath's path may be new but there are lot just behind. If you are in a hurry to develop the application using Knupath Hermosa processor and by chance attending 53rd Design Automation Conference (DAC) in Austin, Texas (where this company is now headquartered), you can try to grab a developer board from the company. To place order online visit the URL: https://www.knupath.com/products/developer-board-program/