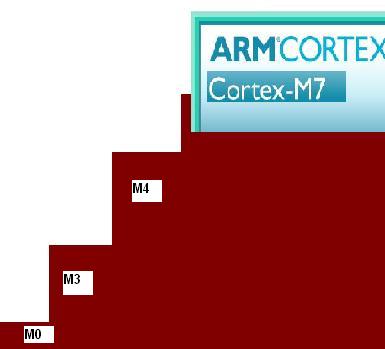 There are multiple factors driving the increasing speed in growth of ARM Cortex M series.

The driving factor is 32-bit Cortex M series consume less power. However this is not so special, there are a lot of proprietary cores which also consume less power than ARM Cortex M series. But the real advantage to the embedded system designer is, they can choose the microcontroller from multiple vendors and uses same code which is written for other ARM Cortex M based microcontroller. ARM Cortex based microcontrollers across different vendors are code compatible, that is another big factor pushing the sales of ARM Cortex M series microcontrollers. The third important factor is broad availability of compilers, IDE, debuggers and other software development tools from third-party vendors.
The fourth factor is basically market, IOT growth is going crazy from past 18 months. The size and growth of IOT attracts investment and focus from companies in application areas such as consumer electronics, wireless, industrial, medical and in fact nearly every application area. Robotics is another interesting area for ARM Cortex M7.

The sensor data, audio, video requires now increased level of computing which is more of a digital signal processing type. In some applications engineers can explore using microcontroller to do some level of DSP computing on-board instead of depending on the host processor or a cloud. Though ARM Cortex M4 is equipped with DSP capability, but it lacks the expected performance. ARM Cortex M7 fills the gap where engineers are looking for increased DSP processing capability in a microcontroller.

So if you are the embedded systems designer explored the idea of using ARM Cortex M4 for some kind of signal processing and find you need DSP computation capability in ARM Cortex M4 series doesn't have enough DSP power. ARM has answered to your requirements by offering you ARM Cortex M7.

If you are VLSI designer, you can explore ARM Cortex M7 for your new design using 28 nm or 20 nm nodes.

STMicroelectronics has added STM32 F7 microcontroller (MCU) series based on ARM Cortex-M7 to its STM32 family of more than 500 pin- and software-compatible microcontrollers. ST said its STM32 F7 series leapfrogs the industry’s previous high-performance 32-bit Cortex-M champ ST’s own STM32 F4 in delivering up to twice as much processing and DSP performance that is accessible via a seamless upgrade path.

Expected uses of Cortex-M7 include smart control systems employed in a range of applications such as motor control, industrial automation, advanced audio, image processing, a variety of connected vehicle applications and other Internet of Things (IoT) uses.